Google requires little introduction as one of the world’s largest companies in the internet-related space. Whether it’s their search engine, cloud services or business products, the company has certainly been one of the major forces in the web 2.0 world.

While a recent addition to the pantheon, TikTok is undoubtedly one of the biggest names in web 2.0 social media. While Google and TikTok are celebrated widely in their arenas, little has been said about their contribution to the adoption and growth of web 3 technology in Africa.

Africans are extremely excited about web 3 and the possibilities it brings for the continent to level up with the rest of the world in some technological aspects. However, the adoption of web 3 technologies in Africa has been impeded by many factors. Examples of such factors are the regulatory stance, the use cases of web 3 technology and access to the internet.

Recently, Tik-Tok and Google embarked on two separate projects that will help reduce the impact of at least one of these factors; internet access.

The backdrop of the developments is the challenges with internet access in Africa. Internet access is important, if not critical, to cryptocurrency, non-fungible tokens and other web 3 technologies. The global average internet penetration rate stands at 62.5 per cent.

Europe as a continent has a penetration rate of 98 per cent. In Contrast is Africa, where the internet penetration rate is 43.1%, which is hardly inspiring. Behind this statistic are the challenges of internet infrastructure and their cost. While African internet pricing is not outright out of the norm, comparing it to average income levels shows that internet cost is out of reach for most Africans.

Also read: Art works from Lusophone Africa to be auctioned in Paris

Google is truly monolithic when it comes to its contribution to the internet as we know it. Born from a PhD research paper by Larry Paige and Sergei Brin, Google found its feet by helping the world search the internet.

Today under the umbrella of the Alphabet corporation, Google spans Cloud computing, internet advertising, social media (YouTube) and many other important parts of the internet as we know it.

Chinese former news aggregator ByteDance owns TikTok. The company came into ownership through the acquisition of the social media platform Musical.ly. It transitioned into a short-form video content platform and never looked back. Today it is one of the most frequented and recognisable social media platforms, with 1 billion monthly active users in 2022. 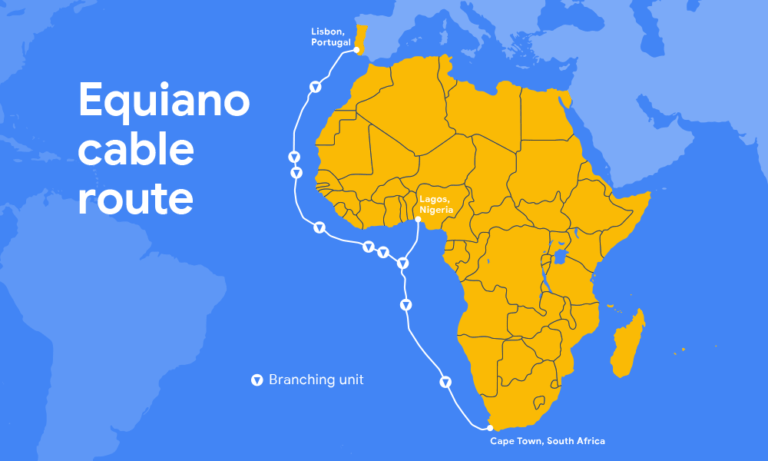 Equiano will be the first subsea cable to incorporate optical switching at the fibre-pair level, rather than the traditional approach of wavelength-level switching. This greatly simplifies the allocation of cable capacity, giving us the flexibility to add and reallocate it in different locations as needed. And because Google fully funds Equiano, we’re able to expedite our construction timeline and optimize the number of negotiating parties.

In September 2022, TikTok partnered with ThinkWiFi to launch wifi Internet access hotspots across South Africa. While the idea on the surface looks like a play by the short-form video social media king to increase its usage statistics, it also has a bearing on internet access and penetration in Africa. The project piloted 50 free wifi hotspots in Soweto, Gugulethu, Khayelitsha, and Bushbuckridge.

Social media is often pointed to as a distraction from the real business of the internet. It is the gateway through which many first understand just how useful the internet can be. Today many regard Youtube as a formidable education platform far removed from its early days as a platform for music and cat videos. It is still a hub for those types of videos and more. TikTok aims to make the internet more accessible to South Africans through these free internet access hotspots.

We understand that as an entertainment platform accessible on mobile devices, TikTok plays an important role in the digital world. With this pilot, we hope to encourage more people to join digital spaces such as ours, to not only create content but to learn new skills and educate fellow community members about their passion and interests.

We are excited to be making a contribution to one of the most important needs of our people today. Opportunities on the internet for our youth are endless but many South Africans do not have access to digital hardware, digital literacy skills and internet connectivity. The latter reality is exacerbated by the high cost of data and the limited availability of infrastructure to support broadband penetration targets. We are delighted to contribute towards bridging the digital divide, promoting internet accessibility and reducing digital inequalities in our country

The pilot phase of the TikTok wifi hotspots is expected to run for 6 months from September 2022. ThinkWifi’s first foray into free wifi internet hotspots was a collaboration with Google in the Cape Flats region of South Africa. The current project with TikTok will offer 442 free wifi hotspots.

Google is no stranger to the quest for improving internet access around the world. Equiano is Google’s 14th internet infrastructure project. TikTok, however, seems like a more unlikely hero in the quest to connect more of Africa to the internet. In terms of the internet game, TikTok seems more like johnny-come-late. However, their contribution to the world in terms of social media and content is undeniable.

Africa as a whole certainly needs more internet access and cheaper internet while we are at it. These are two important projects that go some way towards delivering both these needs to Africa.

Zambia has a lot to offer tourists. This southern African country boasts of state-of-the-art lodges, parks and magical sceneries such...

Join 99,632 other subscribers.
No Result
View All Result