Close calls on rates in Kenya – Zambia as paths split

Differing inflation trajectories in Kenya and Zambia will likely see their central banks take divergent paths when they make their final interest-rate decisions of the year last week.

The votes of both monetary policy committees will be close calls, with the outlook up in the air as their risk of currency depreciation escalates.

East Africa’s largest economy is set to raise borrowing costs for a second straight time, according to most economists surveyed by Bloomberg. A narrow majority predicts the Kenyan central bank will slow the pace of rate increases to half a percentage point from 75 basis points in September.

The calculus is different for Zambia, Africa’s first pandemic-era sovereign defaulter whose currency is among the world’s best performers since mid-February despite a recent bout of weakness. The central bank is set to hold its benchmark rate at 9%, according to three of five analyst predictions compiled by Bloomberg.

The focus in Kenya remains on sticky inflation and the need to shield the wobbly local currency. By contrast, consumer-price growth in Zambia is at four-month low, with economists polled by Bloomberg expecting it to slow to an average 8.8% next year, from a projected 11.2% in 2022.

Kenya’s inflation is at a more than five-year high and on track to remain elevated in the short term due to increases in excise duties, the removal of fuel subsidies and the continued depreciation in the shilling, Nairobi-based Cytonn Investments said in a research note.

Inflation has been above the central bank’s 7.5% ceiling since June, with the local currency losing almost 8% against the dollar this year. The depreciation has fanned price growth, which accelerated more than forecast in October to an annual 9.6% — a level last seen in 2017 when a severe drought drove up food costs. 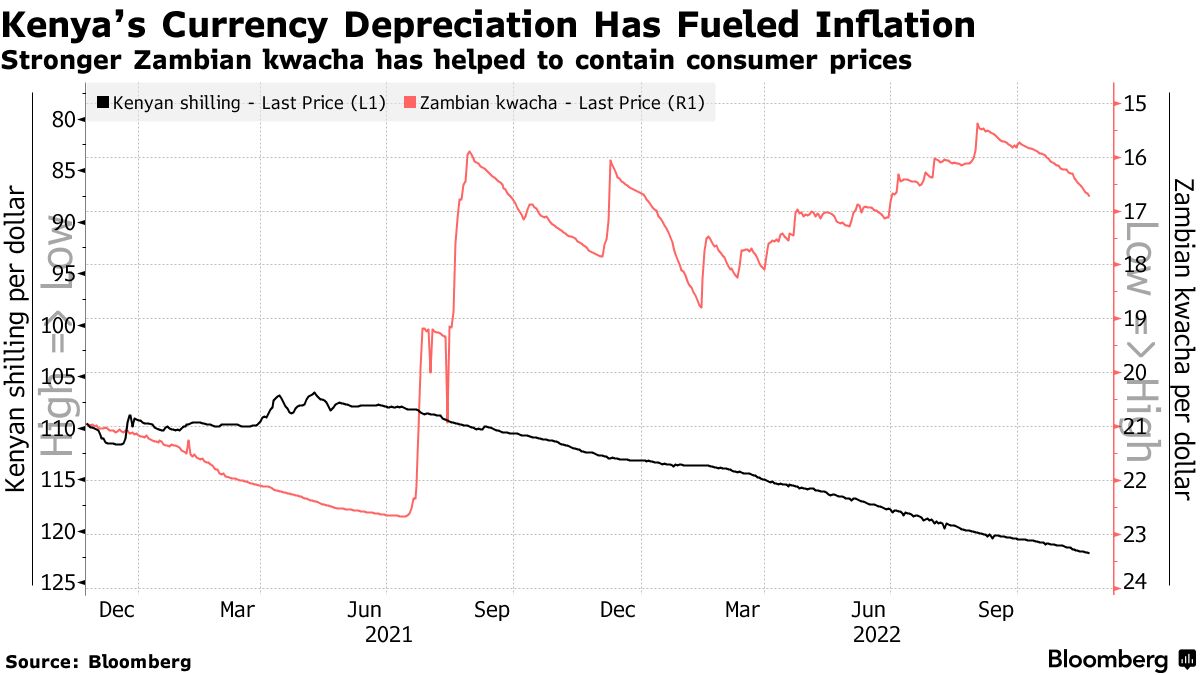 Zambia’s central bank is one of the few to hold rates throughout this year, a period of global monetary tightening in the face of one the biggest inflation shocks in decades.

Prices have been contained by a sharp appreciation of the kwacha against the dollar since the election of Hakainde Hichilema as president in August last year, a potential debt restructuring and a $1.3 billion bailout package from the International Monetary Fund.

Still, the kwacha has weakened since September. And now higher food inflation, alongside the loss of favorable base effects, may steer headline price growth back to double digits from December onwards, said Irmgard Erasmus, senior financial economist at Oxford Economics Africa.

The outlook may prompt a 50-basis point rate increase in February, she said.

Angola’s premier energy event is set to make an electric return from November 29 to December 1 this year in...

Join 100,055 other subscribers.
No Result
View All Result