No Result
View All Result
Home OpenTalk: Venture Capital in Africa – The last frontier in tech innovation, with Eric Osiakwan

There is no denying that Africa is the world’s next big growth market. With little to no legacy investment in technology, African countries are leapfrogging its developed counterparts in the digital world.

Funding and finance are perhaps one of the last deterrents to the development of a full fledge digital reality and alternative finance is at an all-time high.

In As the digital economy emerges in Africa at an unprecedented pace, we sat down with our friend Eric Osiakwan – a man at the forefront of Venture Capital on the continent to learn more about the reality, challenges and rewards of this market.

With over 15 years in the ICT industry, Eric has an impressive track record of 32 African countries where he led a number of projects from setting up ISPs, ISPAs, IXPs to jumpstarting high-tech start-ups. As managing partner of Chanzo Capital and co-founder of the Angel Fair Africa, few people have the insight into the world of tech start-ups and scale-ups in Africa as Eric.

The Ghana native has authored “The KINGS of Africa’s Digital Economy” and co-authored the “Open Access Model”, adopted globally by the telecommunications industry.

Fabio Scala: It’s Great to see you again Eric and thank you for taking the time to chat with us today. I know you have just wrapped up another successful edition of the Angel Fair Africa, this time in Tanzania. If you don’t mind, we could start by talking a bit about the current state of Angel investing in Africa as I know for a fact that there’s a lot of misconceptions from VCs coming from different geographies. 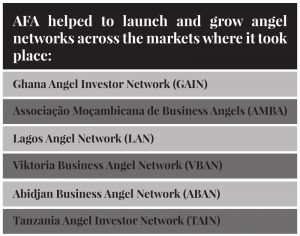 Eric Osiakwan: Thanks for the kind invitation Fabio and it is a pleasure to share with you and your amazing audience. We started Angel Fair Africa (AfA) in 2013 with the intent of bringing selected entrepreneurs and invited investors together to DO DEALS and over the last 7 years we have hosted the event in Joburg, Lagos, Accra, Nairobi, Abidjan, Maputo and as you indicated Dar this year. A total of $23M worth of deals have been closed over the 7 years and this year we recorded our first exit – ConnectedMed acquired by Merck Group.

As Chanzo Capital, we started AfA to enable deals by spotlighting and growing the COMMUNITY of entrepreneurs and investors across the continent through CAPACITY building and the provision of CAPITAL – these are the 3Cs of success that we provide as a firm. We have invested in 16 tech ventures so far some through the event with 4 being profitable, 4 at break even, 4 at early revenue and 4 strike outs. Our track record is therefore a 4×4.

Our event has also helped in launching and growing angel networks across the markets we have had the event so the angel investing community is growing rapidly in Africa as more and more local capital is being unleashed to match the foreign capital flowing into the continent – majority of which are coming from the African diaspora.

A lot of these early stage investments are tickets of US$5K to US$250K and as these companies grow, we are beginning to see venture capital investments from US$500K to US$5M which is the focus of our current fund. One of the fundamental differences in capital requirement between Africa and the US for example is the ticket size. In Africa you get a lot more for your bucks and the entrepreneurs are very capital efficient – suffice to say there is not a lot of capital in these eco-systems anyway. But developing this discipline of being capital efficient has long term impact on the businesses, for example, three of our portfolio companies got to profitability with not more than US$250K in investments.

Fabio Scala: That’s quite a record! I’m sure that your personal experience as part of Africa’s digital growth was paramount. Could you tell us a bit about the road that got you to this point?

Eric Osiakwan: Well, I was lucky to be involved as one of the early pioneers of the Internet on the continent, between 1998 and 2008 I helped build a couple of ISPs, ISPAs and IXPs across 24 African countries. I was also instrumental in founding the Ghana ISP Association and Africa ISP Association among others, so this gave me a deep experience of the Internet industry on the continent.

I then got a fellowship to Stanford University where I focus on development the Open Access Model for backbone infrastructure development – this culminated in a WorldBank sponsored study focused on the African continent because we lacked the telecom infrastructure to enable broadband. After the study, I was invited by the Kenyan government to be part of the team to start The East Africa Marine Systems (TEAMS) – the first submarine fiber cable to connect East Africa to the rest of the world.This ushered me into the world of building subsea and terrestrial fiber networks – these fiber nodes connected to the mobile networks resulting in broadband connectivity on cell phones in Africa. This made Africa a mobile first, a mobile only and a mobile web continent – significantly different from the global north.

Little did I know that these experiences were preparing me to start mentoring and then investing in African tech entrepreneurs and ventures – it all started accidentally. My involvement with Hubtel (then SMSGH) was the first accident – the founders participated in an entrepreneur’s bootcamp I hosted in 2003 under the auspices of the Ghana New Ventures Competition (GNVC). The company broke even in the second year and became profitable in the third year – I then helped them grow the business into multiple African countries given that I knew those markets, so my previous experience became relevant as Hubtel grew. I have since mentored and invested in tech ventures like Finaccess and HotelOnline in Kenya, Digitech in Ivory Coast, NestSquare in Nigeria, eCampus, Farmerline, OZE and Forhey in Ghana, Mavoni and Zulzi in South Africa, just to mention a few.

Fabio Scala: I have to say, that’s quite a CV. Could you elaborate on your KINGS narrative and its relation to Chanzo Capital?

Eric Osiakwan: I came to realise that majority of my entrepreneurial ventures and investments where concentrated in Kenya, Ivory Coast, Nigeria, Ghana and South Africa so I started looking more deeply into these countries and that’s how I came up with the KINGS narrative. The narrative speaks to the countries leading the digital economy in Africa – this is because as online became a lifestyle in Africa I postulated that the online lifestyle was going to lead to digitisation of African economies such that essential sectors of the economy are going to experience interventions from the digital tools available online. I then begun to see entrepreneurs doing exactly that – using online tools to reduce friction, fix pain points, provide efficiency and in some cases disrupt and shift paradigms.

This phenomenon led me to start thinking about formalising a structure to turn what I was doing a hubby into a day job so after researching for a while I came up with Chanzo Capital as an early stage investment vehicle incorporated and licensed in Mauritius in 2014. Chanzo is a Swahili word for early stage which signifies our character. Our focus is providing Capital, Capacity and Community to entrepreneurs in the KINGS countries for now but we hope to expand into other markets over time. Two of my colleagues from my previous life have joined namely; Ian Ziddah, Operating Partner based in Accra, Ghana and Tinyiko Valoyi, Venture Partner based in Joburg, South Africa so we have a Ghana, Kenya and SA office.

Our current fund is focused on growth investments within the KINGS countries. We realise that the first-generation tech ventures in the KINGS countries have reached maturity and in most cases are looking for growth capital to expand geographically into other countries – this is the focus of the fund. The fund is going to provide capacity and community in addition to the capital which would range from US$1M to US$10M.

Fabio Scala: I see, so the KINGS are countries getting ahead of the game in Africa, but what about countries at earlier digital development stages? What would you say are the geographies to lookout for and the key opportunities?

Eric Osiakwan: We have begun to see that countries like Mozambique, Tanzania, Rwanda, Angola, Ethiopia, Senegal are fast advancing their digital developments which is why we are taking AfA there – we had an amazing event in Maputo last year, this year was better in Tanzania, we going to Senegal next year then to Angola in 2021 and most likely Ethiopia or Rwanda in 2022. It is beginning to feel right that we threw the KINGS challenge which has led to these countries now working to catch up. This means there would be more markets to expand and invest into – the digital economy is spreading fast across the continent.

This feeds very well into the Africa Continental Free Trade Agreement (AfCFTA) which is meant to create a common market in Africa as part of vision 2063 so imagine a common digital economy in Africa where tech ventures can trade freely across borders? Technology itself is going to play a crucial role in the creation of the common market which is going to be beneficial for the tech ventures also. Suddenly expanding from Ghana to Mozambique would only require you to overcome the language barrier because all the other barriers would no longer be existent. A common market of 1B that would expand to 4B in the next two decades.

Fabio Scala: I’m very familiar with some of the countries you mention and I’m sure my friends in Mozambique, Angola and Ethiopia will be very happy to hear your insight. To wrap up, could you tell us the segments you would highlight as the most prominent and what would be your advice for foreign investors looking into Africa?

Eric Osiakwan: Due to the Mobile Money innovation that started in Africa, Fintech has been the most active sector to invest, followed by Agriculture technology (Agtech) and Educational technology (Edtech). Health technology (Healthtech) is also becoming very active but hard to crack like Edtech, however we are seeing successful companies like mPharma, eCampus, etc blazing the trail. Clean technology (Cleantech) is another area that is seeing a lot of innovation around solar and mobile money forming mini and micro grids in rural and semi-urban areas.

Investors looking to our markets need to first get in a plane and visit two or three countries because the reality on the ground is very different from what you watch and read. And when on the ground look for local partners to work with because unless you are moving to live and invest in Africa you would not succeed doing it remotely.

Our KINGS fund presents a great opportunity for Limited Partners (LPs) who want to work with a seasoned fund manager with deep experience, knowledge and connections in the Africa tech scene to engage. Our reputation as the first calling card for entrepreneurs has led to a proprietary deal pipeline that we would translate into great returns with high impact across multiple jurisdictions on the continent and abroad.