Special Economic Zones is a concept still in its infancy yet progressive in Zimbabwe. In general, Special Economic Zones exist to attract investments in particular regions of a country. In which, those investing in SEZs benefit from several fiscal and non-fiscal incentives established by the government of that particular country. In the passages to follow, I intend to outline the incentives for operating in Zimbabwe’s SEZs as well as, explaining the finer details of regulation and bodies which govern these zones.

To begin with, the Special Zones Act was enacted in November 2016 as part of the government’s efforts to engage foreign investors and, reversing the country’s economic decline. Through this Act, the Zimbabwe Special Economic Zones Authority was established to oversee and assist companies/investors keen to conduct business in these areas. The main functions of the Authority include administering and controlling SEZs, granting investment licences, and monitoring activities of approved investments. 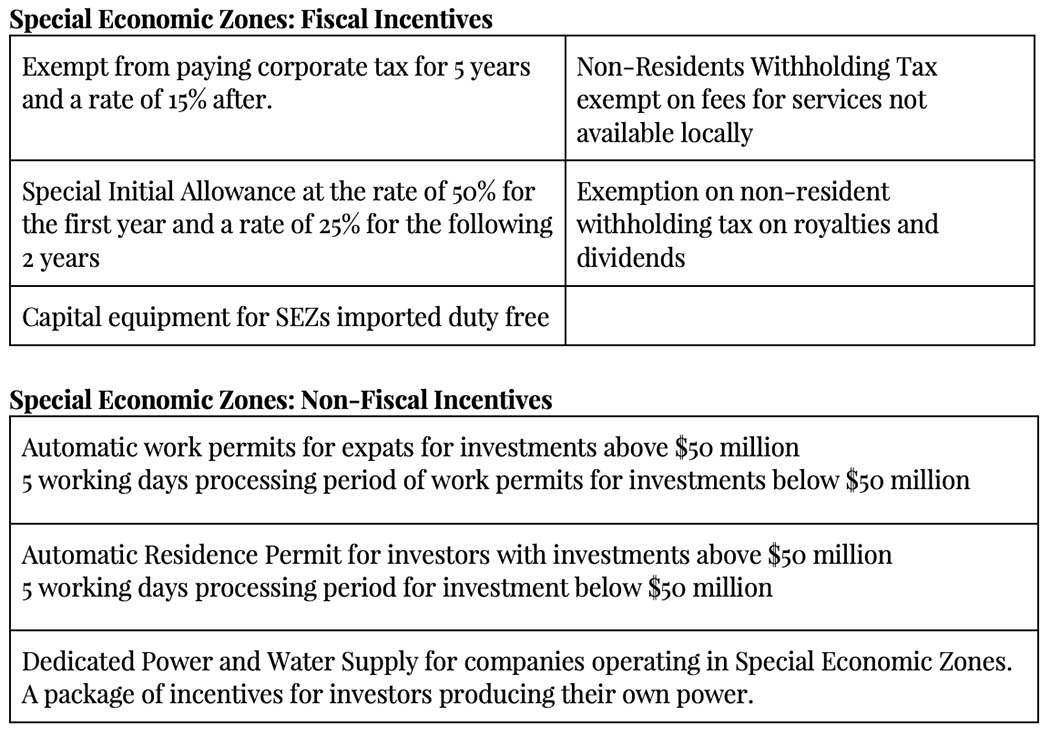 Companies operating outside Special Economic Zones are subject to 25% corporate tax whereas, companies within the Zones pay nothing for the first 5 years and 15% thereafter. The tax rate remains the same for as long as a company continue to operate within the Zones or unless government policy changes.  For companies outside Special Economic Zones, the rates for Withholding Tax on dividends and fees normally depend on whether the parent company or investor is based in a country which has signed Double Taxation Agreements with Zimbabwe. In principal, tax treaties exist between countries to reduce the amount of tax paid by companies or investors. Generally, withholding tax rates are significantly high for investors in countries that Zimbabwe has not signed an agreement with. However, companies or investors in Special Economic Zones are not obliged to pay any tax on dividends distributed to foreign shareholders nor on services provided by the parent company.

Also, another major factor is that companies outside SEZs face an import duty fee on all capital equipment used in daily operations of the business. In contrast, companies in SEZs can import equipment duty free but must prove that the equipment will be utilized in SEZs.

The Zimbabwe government gazetted the Statutory Instrument (SI) 154 of 2018 in August 2018 effectively bringing Special Economic Zones into full operation. Companies such as Iron Steel Company of Zimbabwe, Bernard Development Corporation and Afrochine Pvt Ltd have been granted SEZ status, to mention a few. In Zimbabwe’s case, the concept of Special Economic Zones is to re-engage with the international business community, job creation and increase exports. The latest SEZ regulation requires companies operating within the zones to sell only 20% of their output on the domestic market and export the rest.

This is mainly because the country’s exports declined massively in recent years and impacted the inflow of foreign currency.

The Public Policy Assessment system, with the aim of developing skills for analytical exploration and other procedural methods, was one...